skip to main | skip to sidebar

The Pontotoc Trail, used for so many years by the early settlers of Mississippi, was once an old Indian trail. Later it became a road. Although Mississippi became a state in 1817, Choctaw and Chickasaw Indians held a large part of the land. By the treaties of Dancing Rabbit and Pontotoc of 1830 and 1832, the Indians agreed to give up the land in the Mississippi and move west of the Mississippi River. Colonel Erasmus Ferdinand Potts, born August 21,1801 in South Carolina, traveled the Pontotoc Trail to the Federal Land Office in Pontotoc Ms. in 1836 to purchase land and settle and raise a family. 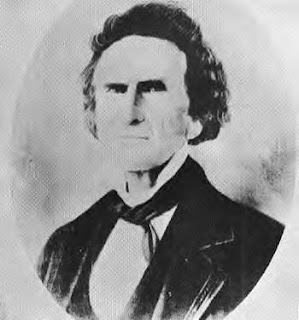 Col. Potts purchased several sections of land in Marshall and Benton Counties. He also owned land in the Delta. His first home, and a large trading post, was built on the Pontotoc Trail, a short distance from the Tippah River. At this time in history before erosion of the hills, Tippah River ran wide and deep with steep banks, so there were only a few places it could be forded. Where the Pontotoc Trail passed, east of the river was a natural ford, with a broad field and a high bluff on the south. From the bluff poured cool springs of water and the trees near by for firewood made this an ideal place for weary travelers to stop overnight. They used wagons, buggies, and horseback for transportation and as a long journey usually took several days, Colonel Potts encouraged people to stop at the camping site and furnished them with supplies. His hospitality became so widely known, people began to call the place Potts Camp.

Records show that Colonel Potts owned many slaves, cultivated a vast acreage of crops and raised hundreds of head of cattle, driving them overland to Memphis to be sold, or shipped to New Orleans on cattle boats. He also shipped quantities of grain.

Colonel Potts built a 22 room mansion and a girl's school named "Woods Academy". Mary Potts, and her mother, Elizabeth, were instructors there. The school burned in 1855 and the students were transferred to Pontotoc. 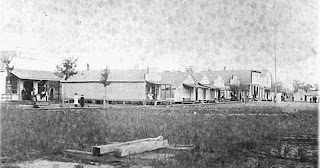 In 1856 Potts invested in the Mississippi Central Railroad and furnished most of the material and labor for the section between Holly Springs and Oxford. He became master mechanic and one of the directors of the railroad company. The entire railroad was completely destroyed during the War Between the States. Because of the mud and dusty roads, Potts and his workers layed boards a long distance on the Pontotoc Road. They built the first levee in the Mississippi bottom, also Tippah River bottom.

The first Potts Camp Post Office was built of logs near his home, with Colonel Potts' daughter, Mary, as the first postmistress. It closed when the Civil War started n 1861. Elizabeth Brownlee, whose family settled near Columbus, was the wife of Colonel Potts. They reared three children; another child died at age two and a half years old. ( photo top right Potts Camp in Pioneer Days, courtesy of Dale Potts Hollingsworth)

When the war broke out, Colonel Potts, was too old to fight, so instead, he spent his time and money to help the Confederacy. No one really knew how he came about the name Colonel, however it happened, he had the name before the Civil War.

The Federal Troops stationed in Memphis and Holly Springs rode through the country raiding homes, burning barns and houses and stealing horses, food, and valuables. When the Federals began to take over this area Colonel Potts counted his gold and silver one night, blindfolded two slaves to go with him and rode away in a wagon. After the men dug the holes to bury the treasure, they were blindfolded again. I could find no record or knowledge if it's location was ever known or discovered.

Colonel Potts was arrested, tried on three counts, and convicted for helping the Confederacy. He was sent to Memphis then to Alton Federal Prison (near St. Louis, MO, on the river banks). He was too old to stand the brutal treatment, so the first settler of Potts Camp died December 16, 1863. Federal Troops brought his body home in a metal box filled with shavings. His wife wouldn't let them bury him until she examined the body to be sure it was her husband. After finding a scar on his ear she was satisfied, so they buried him in "Potts Cemetery", near Winborn. After the Federals helped bury Colonel Potts they ripped the carpets from the floors of his home, loaded them in the best carriages the family owned and drove away.

Later in 1870 Elizabeth was buried near him.

His son, James Benton Potts ,was injured while serving the Confederacy and never completely recovered. James B. is buried in Hillcrest Cemetery in Holly Springs. 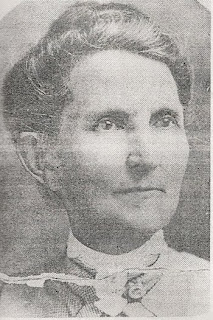 Mary A Potts Reid was the youngest child of Colonel Erasmus Ferdinand Potts .
Mary was born Jan 28, 1840. She attended college in Memphis, Tn and she was fondly favored by her father , who gave her a wonderful party with friends for her wedding. She married Mr. Fant and they had two children, Dora and a son who died very young. Later Mary divorced him. Mr. Charlie Reid became her second husband they reared one son, Cornelius Potts Reid. I found this an unusual bit of documented history, Mr Charles Reid purchased the first bathtub in town and later sold it to Mrs. Julia Porter for her hotel. It was later sold to Sam Howell a local farmer, to use as a watering trough.
Corneille was born, November 11, 1877. Corneille married Mary Lou Anderson of New Albany, Ms. Mary Reid gave her son Corneille the gift of a Bible, which held the following poem, written to her son on Dec 31, 1894.

To My Dear Boy
by Mary Potts Reid
When tempted son, to go astray
Pause, pause, my child; O turn away
From sin's alluring form.
Go to thy chamber and, when there,
Check in thy mother's gift a prayer
A refuge from the storm.
Read, my dear son, believe and live
Than not in vain, this Book I give
To my own darling boy.
Twill smooth for thee life's stormy path
Teach thee to shun thy Maker's wrath
And wear his crown of joy.
When grief shall check thy young heart's mirth
To weep that she who gave thee birth
Has passed into the skies
Then ponder o'er thy mother's gift
It will thy drooping spirit lift
And dry those weeping eyes
And as your hands it's pages turn
Resolve dear boy, of Christ to learn
Be lowly, meek and mild
Remember she who gave this book
May though unseen, upon thee look
Rejoicing in her child.

Mary Potts Reid donated numerous plots of land to the town of Potts Camp including the church lots for both Baptist and Methodist churches in town, school lots, and cemetery land. 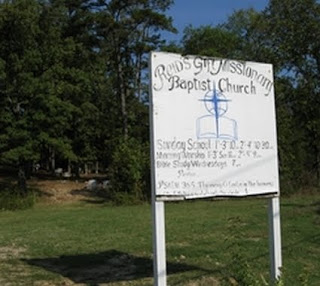 The Reid's Gift Missionary Baptist Church and Cemetery (African American) are named in her honor, as is, the Mary Reid School. The New building for the Reid's Gift Church was re-built in the 1940's. It sits just on the edge of town on Old Hwy 78 on a small hill.
Mary also donated land for a right of way, when the Frisco Railroad came through this area in 1886. The settlers and merchants of Col Pott's camping ground built a depot about a mile from the river, more settlers and merchants began moving into the area, and they decided on the name their village in honor of Col Potts, who had first settled the land which would later be established as a levee camp in the 1870, and would emerge as the town of Potts Camp in 1912. 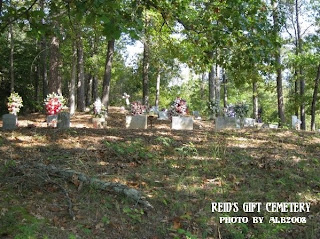 Mary A. Reid played an important role in the settlement and growth of Potts Camp by donating large amounts of land to the developement of the community. She was fair and loved by most who knew her, The African American Community as well as the white settler's thought very highly of her. 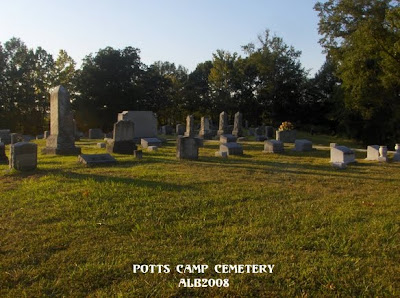 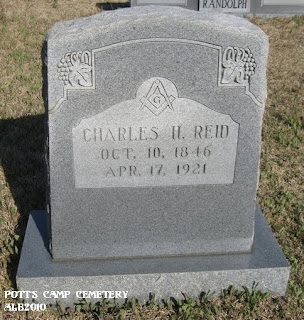 The poem and photos of Mary Reid and Col. Potts were used with permission by Mrs Dale Potts Hollingsworth. I had the pleasure of visiting the home of the 94 yr old grt-grt grand-daughter of Col. Potts in May of 2010. Mrs Hollingsworth still lives in Pott's Camp in the home her grandfather, J.A Pott's built in 1910. She is still a writer for The South Reporter, newspaper and is known to most locals as "the town historian". She is also the author of Memories of Potts Camp on the Old Pototoc Trail. published in 1978. She was so kind and gracious to spend some time talking and answering questions with me, about her family and the history of Potts Camp. Without her stories and written records, past down thru the generations, and her willingness to keep the towns history alive, this article would not have been possible. 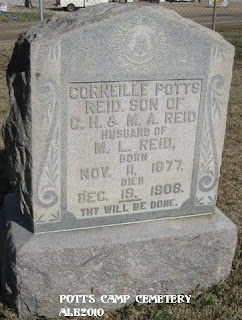 Photos and interments of both the Reid's Gift Missionary Baptist Church Cemetery and The Potts Camps Cemetery can be found on the FindAGrave.com website. (see link below)

Angela Lucius
Byhalia, Mississippi, United States
I am a volunteer cemetery photographer and history researcher, I currently submit headstone photos and inscription data to the FindAGrave.com website. I am the Author of Hauntings In My Head, A Collection of Ghostly Southern Poetry and Darkness Deep A Collection of Dark Poetry and Short Stories, available on Amazon.com and Createspace, I have also been published by Seventh Star Press in Southern Haunts Spirits That Walk Among Us and will also be featured in Southern Haunts Devils In The Darkness Book II due out in March. I have written history, science and paranormal related articles for the MSSPI Research Room Blog here on Blogger and Dark Literature posts and reviews on the MSSPI Dark Pens blog on Wordpress.IYou can read some of my poetry and short stories on my new literature blog at www.Twizted Twigs.wordpress.com I am also a retired nurse of 20 yrs.

Hauntings In My Head, A Collection of Ghostly Southern Poetry 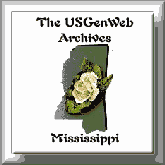 Other Blogs of Interest